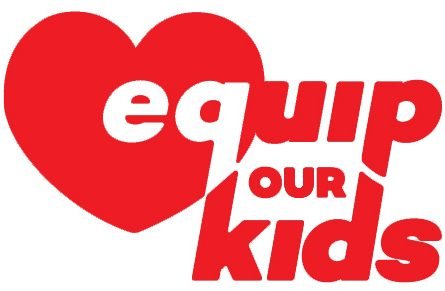 EQ is now widely acknowledged as equally important (and many argue, more so) than IQ
– and as increasingly key to both personal life and professional success. 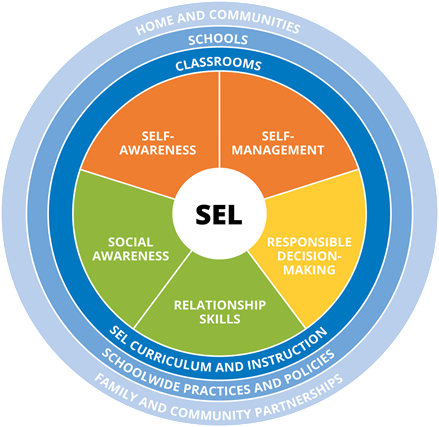 “Emotional Intelligence” as a concept gained broad public attention with the publication of Daniel Goleman’s New York Times bestseller of the same name in 1995.

It entered pop culture as a valuable way of understanding and defining fundamental human capacities and behaviors by playing on the widely recognized idea of IQ.

EQ (as many now refer to Emotional Intelligence but sometimes known in academic circles as EI) is defined by the Oxford Dictionary as “the capacity to be aware of, control, and express one’s emotions, and to handle interpersonal relationships judiciously and empathetically.”

(Above: Image of the core competencies supported by the Collaborative for Academic, Social and Emotional Learning. The two outer rings represent areas in which schools ideally will adopt policies and procedures that further the potential of students to experience and practice SEL skills outside of classroom environments.) 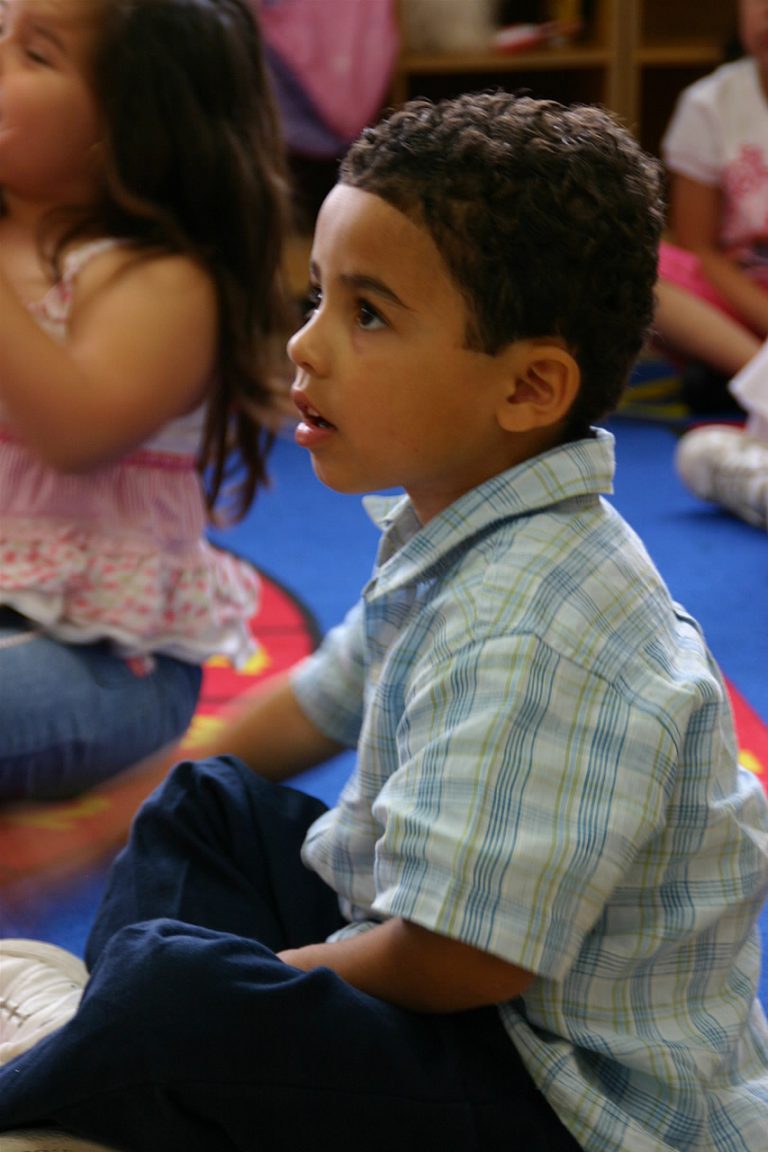 A FIRST-STEPS EQ PRIMER FROM ONE OF THE PROGRAMS, RULER

The term EQ over time often became coupled with the term “social intelligence,” meaning the ability to understand, empathize with, and influence the emotions of others.

From Goleman: “In practical terms, this means being aware that emotions can drive our behavior and impact people (positively and negatively), and learning how to manage those  emotions – both our own and others – especially when we are under pressure.”

Marc Brackett, Director of Yale’s Center for Emotional Intelligence, and Susan Rivers, protégés of Salovey, put it this way: “The process of integrating thinking, feeling, and behaving in order to become aware of the self and of others, make responsible decisions, and manage one’s own behaviors and those of others.”

Psychology Today dives in with this definition: “The ability to harness emotions and apply them to tasks like thinking and problems solving….[and] the ability to cheer up or calm down another person.”

Youth-focused approaches that combine EQ development with other life skills, have now come to be defined by the term Social and Emotional Learning by educators and in child development and psychology realms, as well as in certain business quarters that apply such learning to adults.

The Collaborative for Academic, Social and Emotional Learning, or CASEL, the nation’s leading SEL practice, policy, and research organization, defines SEL as “the process through which children (and adults) acquire and effectively apply the knowledge, attitudes, and skills necessary to understand and manage emotions, set and achieve positive goals, feel and show empathy for others, establish and maintain positive relationships, and make responsible decisions.”

CASEL organizes SEL into five core competencies: self-management, self-awareness, social awareness, relationship skills and responsible decision making. CASEL pointedly notes that for SEL to be highly effective it needs to “nest’ and be practiced in all school environments by all staff, including integrated in academic classes and non-class activities, in community service by students, and with parents integrated at the school level.

Correctly implemented, CASEL believes, SEL is the platform and process for a potential revolutionary leap forward in educating the “whole child.” (For a specific breakdown of what kids learn in acquiring these competencies, see chart at bottom of this page.)

The Power of SEL

A defining characteristic of social-emotional learning is that it empowers children to manage their own behavior in positive and productive ways, shifting control to the child.

This counters the “compliance model” widely used in U.S. schools, where adults hold all the power in classrooms and children are passive participants, not drivers of their own development and learning.

Being active in their own development is fundamental to emotional-intelligence learning, along with acquiring the ability to manage one’s emotions, which is hardly a given for a large segment of  the population that, without  this learning, is beset with remarkably high numbers of people suffering from anxiety or depression, or with anger issues, or experiencing high degrees of interpersonal conflict, violence and suicide.

In fact, most of us experience more emotional upsets and the consequences of them than we prefer would be the case – in relationships, work, friendships, and in the everyday course of business.

This may be good for the bottom lines of pharmaceutical companies and therapists but is hugely costly in infinite ways to the common good and to the pocketbook of the society as a whole.

Neuroscience readily supports the positive effects of promoting social-emotional learning. Emotional reactions have been found to reside in the primordially-earlier lower brain around the amygdala while more sophisticated learning, thinking, and creativity occur in the later-in-evolution frontal lobes or “higher brain.” Brain scans show that when the lower brain is activated by emotional upset it lights up while the higher brain literally goes dark in activity.

The implications for students can’t be overstated – all learning stops until they can calm themselves if agitated, with their minds either distracted or full of negative thoughts about themselves, others or the situations they are in. Read more about Neuroscience.

Conversely, academic learning takes place on a rapid scale once students are taught to manage their emotions and responses – and surveys of student and teacher satisfaction often soar into the 90 percentile after a school prioritizes this learning.

An important note: Social-emotional learning should not be confused with what educators call “Positive Behavior Interventions and Supports (PBIS),” a widely implemented system based on “carrot-like” tangible rewards.

Moreover, in uninformed reports, some EQ goals and subset practices are mistakenly taken for the entire complex of EQ learnings students experience. Examples are “violence prevention,” “anti-bullying,” “grit,” “resilience,” “mindfulness” and “growth mindset” practices – the latter a training to be able to take on challenges and failures as normal and educational in themselves rather than as obstacles and defeats.

One other note: Education is littered with competing terms for social-emotional learning, among them “emotional literacy,” “non-cognitive education,” “character education,” and “ethical and moral development.” By whatever name, schools adopting such learning should include the core competencies explained here and their goal should be the other term popular with educators: “Whole Child Development.”

✤Self-awareness: The ability to accurately recognize and identify one’s emotions and thoughts and their influence on behavior.

✤Social awareness: The ability to take the perspective of and empathize with others from diverse backgrounds and cultures, to understand social and ethical norms for behavior, and to recognize where there are family, school, and community resources and supports.

✤Relationship skills: The ability to establish and maintain healthy and rewarding relationships and collaborations with diverse individuals and groups and learn not to take others behaviors personally. Includes the skill called “active listening.”

✤Responsible decision making: The ability to make constructive and respectful choices about personal behavior and social interactions based on learning to consider ethical standards, safety concerns, social norms, the well-being of self and others, and to realistically evaluate the consequences of various actions.

✤Problem Solving: The ability to identify and solve problems and analyze situations from a reflective sensibility

✤Growth Mindset:  The belief and accompanying learned skills to set goals and grow your talents with persistence efforts  – and by embracing challenges and setbacks as crucial learning opportunities.

EDITOR’S NOTE: TO LEARN MORE ABOUT THE FIVE KEY COMPETENCIES, VISIT THE “WHAT IS SEL? SKILLS AND COMPETENCIES” PAGE FROM THE COLLABORATIVE FOR ACADEMIC, SOCIAL, AND EMOTIONAL LEARNING (CASEL).