Fun Games to Play with Your Kids to Boost Their EQ 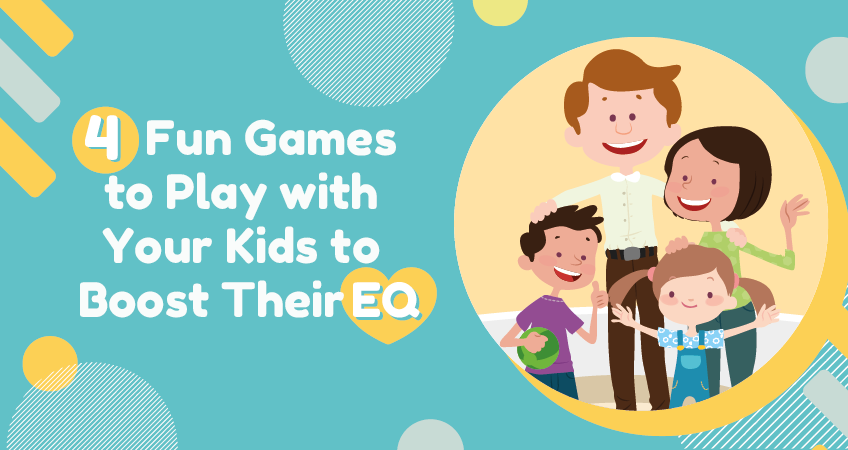 It’s no secret that emotional intelligence is a crucial skill set in childhood. Children who have developed emotional intelligence are better at solving social problems, nurturing relationships, and expressing themselves. Setting your child up to carry these skills into a successful adulthood is a huge part of childrearing and early education.

Kids learn by doing, so practice these skills through hands-on experiences in the form of fun games. Here’s a look at 4 games that boost childhood EQ skills, including social awareness, self-management, active listening, and collaboration.

Physical games are easy to teach and easy to play, and they encourage hands-on learning. You can play for fun, or you can encourage healthy competition by playing for points. 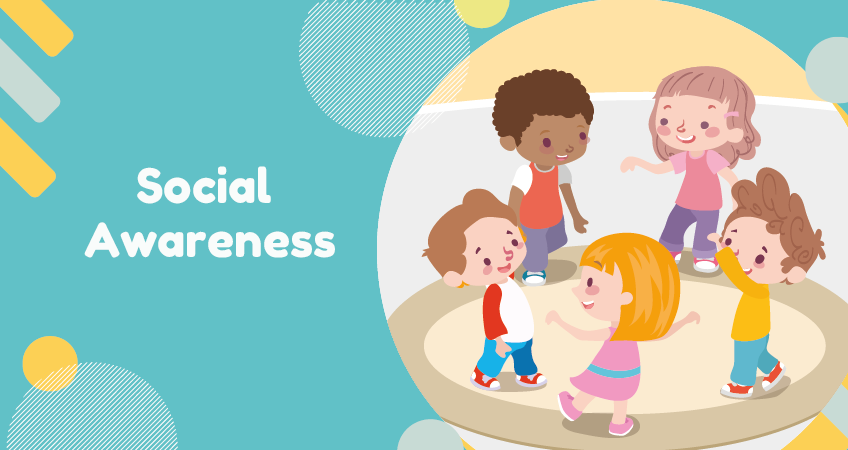 This game encourages social awareness by encouraging children to pay attention to the actions of different group members.

Start by putting children in a circle, standing 12 inches away from each other. Show your children three poses: the Meditator, the Warrior, and the Sorcerer. You can also come up with your own interpretations.

Then, count to three, and on three, everyone picks either the the Meditator, the Warrior, or the Sorcerer, and does it. If any child is left doing the same motion as you, the Chi Master, that child is out.

To add an extra level of nuance to this game, as the Chi Master, try completing the same sequence every time: for instance, do The Crane first, and then The Sonic Boom, and then Chi Master Salute. In this variation, children have to practice their observational skills to guess what you’re going to do next, and they’re rewarded for recognizing the pattern. 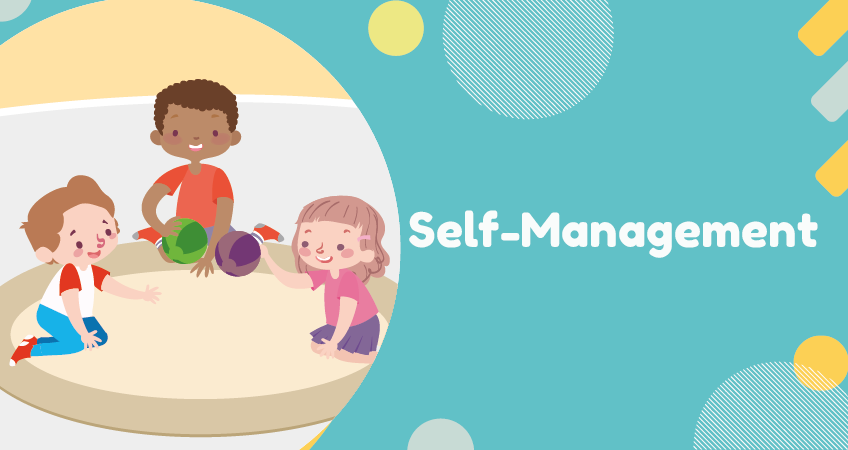 Self-management can be a challenging skill for young children to develop. This game gives your child plenty of opportunity to manage his own goals within the goals of the group. All you need is two balls in two different colors.

Name one ball “Fox” and one ball “Rabbit.” Put the children into a circle, and give Fox to a child at one end, and Rabbit to a child at the other end. Both Fox and Rabbit are hot potatoes and you can’t hold them for longer than one second.

Fox wants to catch Rabbit, and Rabbit wants to escape from Fox. If a child holds Fox, she needs to quickly assess where Rabbit is, and pass Fox to the next child in that direction. If she has Rabbit, then she needs to move Rabbit in the direction away from Fox.

Play for points: If you’re holding Fox and you pass to the child holding Rabbit, you get one point. Play until somebody reaches 3 points.

Some younger children may not understand the concept of “Hot Potato” right away, so try playing a couple rounds of vanilla Hot Potato first to teach the idea of catching a ball and immediately passing it on.

Thought games encourage children to get hold of what’s going on in their minds. You don’t play for points or competition; rather, encourage a discussion after the game about what you did and how it made each child feel.

#3: What You’re Saying Is… (Active Listening) 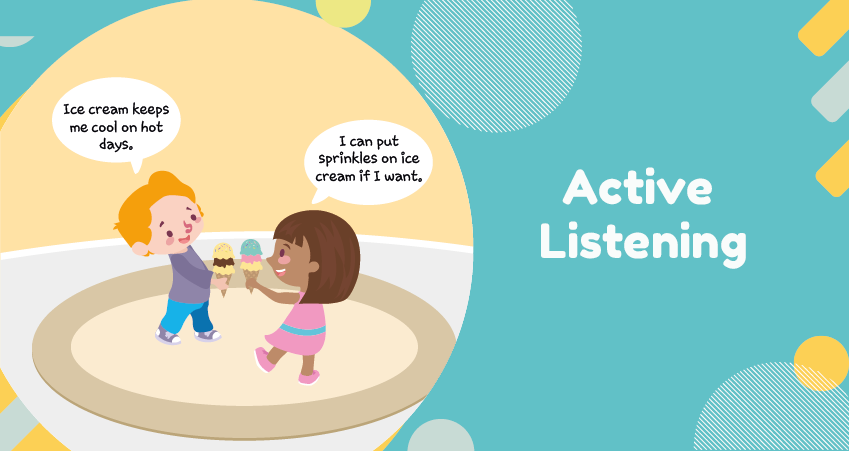 This game hones a child’s active listening skill, which promotes effective communication. This game asks the children playing to do the following:

First, the game leader chooses a topic, and assigns children into pairs. If you’re playing solo with one child, then you pair up and become her partner.

Assign opposite positions. For instance, let’s say the topic is “ice cream,” you love ice cream, and your child hates ice cream.

Now, set a timer for 90 seconds. Take turns sharing your opinion, and your opinion only: no commenting on the other player’s opinion! For instance…

You: Ice cream comes in a million flavors so I never get bored with it.

You: I can put sprinkles on ice cream if I want.

You: Ice cream keeps me cool on hot days.

Child: I don’t like the texture of ice cream.

Next, you set the timer for 90 seconds again, and go back to sharing your opinion. But instead of taking turns sharing one opinion at a time, you state one opinion, and the other player paraphrases it. For instance…

You: Ice cream is nice and airy.

Child: So what you’re saying is that ice cream is kind of whipped and you like that.

Child: Ice cream is too sweet.

You: So what you’re saying is that ice cream has a lot of sugar, and you don’t like that. 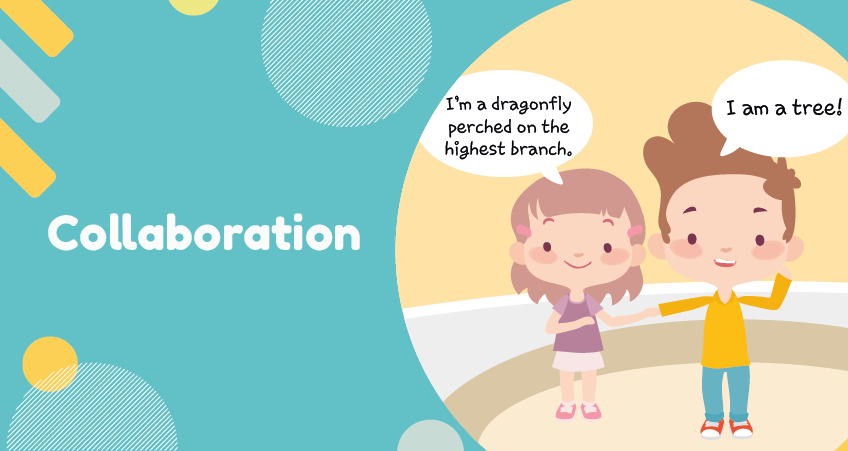 Another thought exercise, this game teaches children to work as a team to create something bigger. It also teaches them how to build new ideas based on the ideas of others, which is an important skill going into education and eventual adulthood.

To start, one child stands on a stage. If you’re at home and don’t have a stage, seat the children on the couch, and have one child take the floor.

The child on the floor begins the game by saying “I am a tree.”

The next child in line on the couch joins him, and makes up her own role. She can be anything, as long as she’s interacting with the tree. She can say “I’m a dragonfly perched on the highest branch.”

A second child comes up and adds his own role, for instance,  “I’m a beehive using the tree’s shelter to make honey safe from the bears.”

Now that there are three children on stage, the first child chooses one of the other two children to leave the stage (she says “I’ll take the beehive”) and they leave together, leaving the third person alone.

Now alone, that child repeats his role (“I’m a beehive using the tree’s shelter to make honey safe from the bears”) and two more children come to join him. Now, these children need to make roles that interact with the beehive, for instance “I am the queen bee ruling the roost” and “I am a hungry bear hoping to grab some honey.”

Keep going until every child in the group has had a chance to be on stage… or go even longer, if you want.

Scientific American says that children don’t develop social and emotional skills by interacting with adults or listening to lectures in the classroom; they develop these skills through organic interactions with their peers. Whether in school, at daycare, or at home, play is an important part of daily life for growing and developing children. These 4 games help your children develop important tools that they will use in daily socialization.

PrevPreviousA Brief History of the Emotional Intelligence Theory
NextIs There a Way to Relieve Chronic Stress in Childhood?Next